THE HOUSE
The house is a building realized in 1700 in a small village called Denno and characterized by small streets and squares with their fountains.
It is not only a house but an "ansitz" if we would like to use the typi-cal term in Tyrol. This means that is an ancient building that enclosed inside its door a small world with a big garden for vegetables, the stables for animals, the basement for conserving wine and sausages.
In fact when you enter into the big door under the typical arc of stones you enter into a small and quit castle with a garden and a basement with the typical ceiling of crossing arcs.
Then there is the beautiful hall at the first floor with a "bifora", double lancet window, and decorations of sto-nes around the doors.
The house have not been changed by interventions that could change its identity, so it maintains again all the value of the time that could remem-ber again a precious past.

THE VILLAGE
The house is located in the quite ancient centre of the village called Denno in Val di Non, Trentino, Italia, north from Verona.
http://www.valledinon.tn.it
Denno is a very ancient village, founded in the Roman age. So it is rich of ancient buildings, and wonderful is the small S.Pietro church of the XIII with the decorations realized by Giovanni and Battista Baschenis.
The location of the village is very good: it is in the south part of the valley, half an hour from Trento, on a sunny and flat land, with the view of the mountains of the Gruppo del Brenta -the first that receive the sun in the morning- and with the view of the Thun Castle.
The village is in the province of Trento, in the middle between Mezzo-lombardo and Cles. The inhabitants are 1157 and the village is at 429 meters on the sea level.

THE NATURE
The apple trees
The village is rounded by apple trees that characterize all the south and central part of the valley. In Spring time the apple trees are blossomed and when the white flowers are open the valley becomes an unique landscape of flowers everywhere!

-- The Rocchetta --
The other natural jewel is the area called Rocchetta. Its is also pro-tected and it is a fluvial area around the Noce river.
It is characterized by micro-habitats for birds and migrant birds.

-- The red lake --
The forest of the village arrives until the Tovel lake, the famous "red lake": the name is referred to the fact that in the past its water became red.

The village is 40 minutes far from Termeno, where is a swimming pool with water games in a big garden. While driving for 30 minutes you rea-ch 2 inner swimming pools with the olimpionic dimensions.
+++ In the garden into the walls it could be possible the realization of a pool.

THE WEATHER
The weather in Trentino is characterized by a quite cold winter and a not too hot summer, that is ever without sultriness. Obviously the weather in the not high part of the valley is different from the top of the mountains.
The archive indicate 85% of sunny days during the entire year and the sun is always clean as is typical in the Italian Alps and is different in the Austrian and Elvetic side.
http://www.meteotriveneto.it/static/ClimaTrentino.php
In attach the numbers of the rain and of the temperatures:
Temperature in January -1° - 0°
Temperature in July 19° - 21°
Rain in January 20 - 45 mm
Rain in July 130 mm
Rain in the entire year 500 - 1200 mm
Snow in the entire year 35 - 75 cm

THE TRANQUILLITY
The report of Transcrime. Joint Research Centre on Transnational Crime indicates the Valle di Non as the most sure place in Italy with a level of criminality that is almost not existing.
An important fact is that the in Val di Non there is a level of 34,9 vio-lent criminal acts every 100.000 inhabitants, while the number becomes 100 in the Pianura Padana and almost 200 in the Italian cities; the situa-tion in the rest of Europe is generally different with number of violent criminal acts that becomes 2116,5 every 100.000 inhabitants in UK and 1962,9 in Austria. http://transcrime.cs.unitn.it

HOW TO ARRIVE
Airplane:
The airports most nearby are the one of Verona, that is 90 km far from Denno and connects with the European cities also trough low cost ?i-ghts (such for example the Germanwings to London Stansted). http://www.aeroportoverona.it
Then there is the Marco polo in Venice that is 195 km far, the Milan Linate, 245 km far, and the new airport in Bolzano, 60 km far.
Car:
Denno is 30 minutes by car far from Trento, almost 45 minutes from Bolzano and 90 min. from Verona.
Lokking at the other towns in the area, Denno is 15 min. far from Cles and 10 min. from Mezzolombardo.
In particular the village is 15 minutes far from the A22 Brenner Hi-ghway that connects with Austria and the rest of Europe to the north.

Public transports:
You could arrive in Denno using the train until Trento and then a small train to the valley, otherwise you could use the daily Pullmans from Trento.
+++ A curious thing is that there is the most ancient cable in Euro-pe. It connects the Mendola pass in the northern part of the valley with Caldaro, close to Bolzano. The difference of level is of 854 meters and the time of moving is of 12 minutes. It began to work in 1903 and has never been stopped.

THE TECHNICAL DETAILS OF THE HOUSE
Location: in the ancient centre of Denno (Trento, Val di Non, Italy)
Dimensions: 130 sm for 3 floors
Garden: 300 mq
Basement with crossing arcs: 130 sm + an other deeper basement 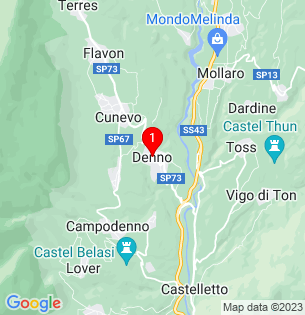 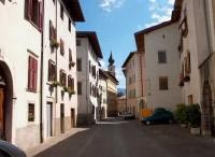 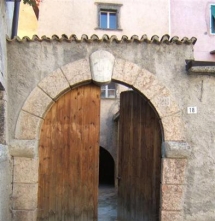 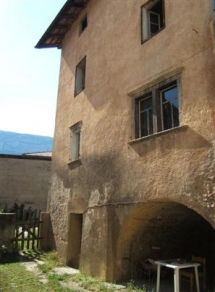 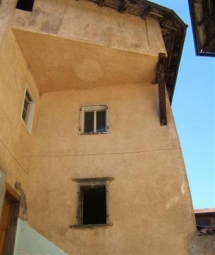 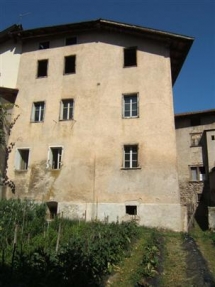 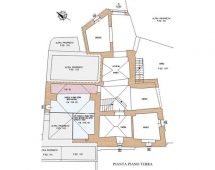